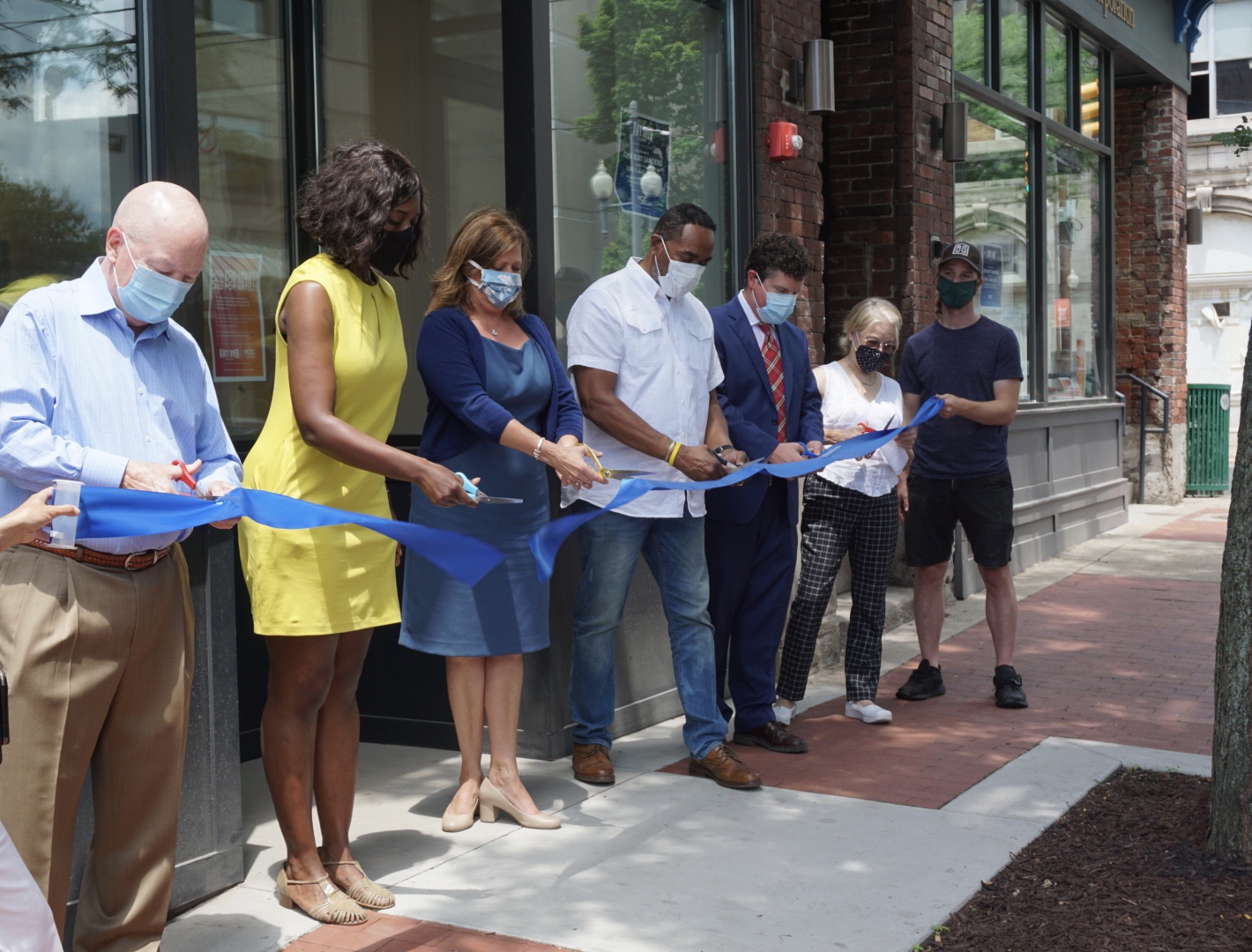 As demands for ‘high rises’ and downtown commutes become a thing of the past, the newly renovated historic Lohr building offers flex, neighborhood office space for businesses with employees concentrated in the East End neighborhoods.

After three years of historic redevelopment, the Wilkinsburg Community Development Corporation (WCDC) announced today that they have repositioned about 6,000 square feet of office space in order to meet the new demand for social-distancing friendly neighborhood office space. The building’s 2nd and 3rd floors, which have their own entrance, bathrooms and HVAC ventilation units, present an ideal leasing opportunity for companies that need a neighborhood remote office that safely brings teams together in one space. Renovations on those floors officially completed this month.

Last spring, the WCDC relocated their headquarters to the historic Lohr Building’s first floor, becoming the first official tenant to occupy the newly renovated 130+ year-old structure while work continued on the 2nd and 3rd floors. The symbolic move coincides with the WCDC’s 10-year anniversary, which it will celebrate this year by readying two significant multi-million projects to completion, including the revival of the Wilkinsburg Train Station. Together, both buildings — which were vacant for a combined 50 years — represent a $9 million investment that will bring over 20,000 square feet of office or commercial space to the market.

“Now that all floors of the Lohr Building are complete — we’re doubling down on efforts to leverage the unique floor plan which specifically allows for a company to have their own, private, social-distance friendly space,” continued Evans.

Since the WCDC’s inception in 2010, over $100 million in public and private investment has occurred in the mile-long business district. In 2018, there were seven commercial property sales, compared to 2015, when there was just one. Private developers are taking note, too: a young group of developers recently purchased a group of buildings along Wood Street that include 10 storefronts and received the first variance for a green rooftop. Casey Renee, Ace Hotel’s former pastry chef, with an impressive New York City restaurant repertoire, will soon open Confections By Casey on Wood Street.

About The Lohr Building
The signature arched windows of the three-story Lohr Building have overlooked the intersection of Wood Street and South Avenue since the horse-and-buggy days, long reflecting the changing face of Wilkinsburg. At various stages of its life, it has served as the home of Wilkinsburg’s first tailor, its first local newspaper, and the first home of the Second United Methodist Church. Many residents remember it as the storefront of the Singer Sewing Machine Co. during the 1950s. Now, thanks to the extensive, $2.5-million renovation, the Lohr is ready for its next incarnation as a premier location for mixed-use businesses. In addition to the WCDC, the building is already home to local favorite Nancy’s Revival diner. Still available for lease are the 2nd and 3rd floor flexible, mixed-use commercial space totaling more than 6,000 square feet.

The Lohr renovation has been spearheaded by the WCDC and made possible in part thanks to financing from Bridgeway Capital; a generous $1 million contribution from The Richard King Mellon Foundation; and a $10,000 grant from the Pennsylvania Department of Community & Economic Development (PA DCED) Facade Renovation Program. The WCDC also received a multi-year $3 million grant from PA DCED’sNeighborhood Partnership Program (NPP), which is made possible thanks to TriState Capital Bank, Highmark, Dollar Bank and the PA DCED.